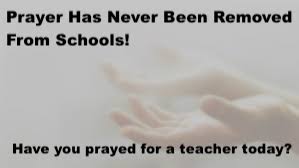 I hear Christians lamenting all the time about two Supreme Court decisions in the 1960s that “removed prayer from schools”. This is a distortion of the facts. I decided it was time to set the record straight.

Those decisions did not remove prayer from schools, but removed state-sponsored prayer from public schools, and frankly I’m glad they did!

Christians have always been for the underdog, for the downtrodden, for those whose rights have been taken away, for those who are being abused. After all, it’s what Christ commanded us to do. And with our constitutional right to freedom of religion, this also includes the freedom to reject any religion. God has never forced anyone to follow Him.

So why would we want to force people to pray? And what would happen if the majority of people were not Christian? Would they then have the right to force us to pray to their god? We should NOT have state-sponsored prayer in our schools, but neither should prayer be prohibited, and according to our constitution it’s not.

The dictionary defines prayer as a solemn request for help or expression of thanks addressed to God or an object of worship. Prayers can be out loud, or silent and in our minds. They can be made with eyes open or closed. While standing, sitting, or kneeling. The Supreme court decision in the 1960s did not ban prayer in schools. The constitution demands freedom of religion, which means you can pray whenever you want.

Someone “in charge” at a school – a principal, board member, or teacher – has made a decision to “ban prayer.” Maybe the decision is made out of fear (many parents are ready to take every decision they disagree with immediately to the superintendent these days). Maybe the decision is due to lack of knowledge (many people misunderstand our freedoms – read the constitution please). Sometimes Christians have allowed themselves to be bullied in these situations. To be fair, the bully doesn’t always know he’s being one.

I pray daily at school – at my desk before I eat – in the hallway before students file in – while proctoring state testing – every Friday when I walk through the campus specifically praying for the school – and every week I pray for the leaders in my school district.

There are some things I’m not allowed to do…

But what I’m allowed to do far exceeds that…

You CAN pray in schools, for schools, for teachers, for administrators, and for parents and students. You CAN run for your local school board. When was the last time you prayed for our schools? Will you take a moment to do so now?

*** James Divine is in his 24th year of teaching, which he believes is his calling. Today’s Christian teachers are on a difficult mission field, but they have the potential for tons of impact. Find out more about James at www.jamesdivine.net.  Find out more about Prayer.