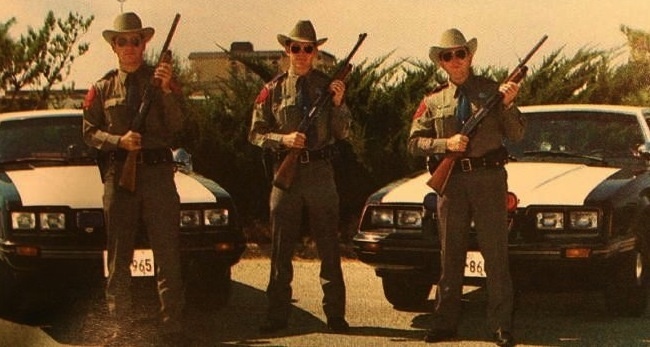 The summers of 2010-2012 I was driving every week to Weatherford, Oklahoma to work on a master’s degree in music education. The trip took me through the Texas panhandle.

The panhandle gets its name because when you view Texas on a map, there’s a thin stretch of land in the northwest corner that – when combined with the rest of Texas looks like the handle to a big ol’ fryin’ pan, you know the kind I’m talking about. They weigh about 57 pounds and are made out of cast iron. When not used for cooking, they have alternate uses as doorstops and behavior modification for wayward husbands.

The panhandle is also flat. It’s so flat that you can see anthills in the distance rising out of the landscape. The road is so straight that I once set the cruise control, lashed the steering wheel into place and climbed into the backseat for a nap.

The thing about the panhandle is it seems that nobody lives there. Oh, you see the occasional cow, the occasional road kill, and vultures. Vultures everywhere, sometimes tearing into road kill that seems like it hasn’t even cooled down yet. You hope and pray that you don’t get a flat tire because you’ll be changing the tire with one hand while fending off vultures with the other.

Did I mention that it is also hot! With air conditioning on, it sometimes felt like the interior of the car only cooled to 85 degrees or so.

I was driving along the panhandle on my way to Oklahoma when I passed a state trooper on the side of the road. Now, it was sometimes tempting to speed along this stretch, especially since I was making this drive every week, but as I mentioned you could see for miles in any direction and I knew I wasn’t speeding at that moment.

The state trooper pulled in behind me. If he wasn’t a state trooper, he could have easily been accused of tailgating. There was no traffic in either direction! We were the only two cars on this four lane divided highway and he was tailgating me. I carefully checked to make sure I was on target for speed. I even racked my brain to try and remember if I had been speeding.

The trooper continued on my tail for 3-4 minutes.

Finally, much to my relief, he pulled out from behind me, scurried over to the left lane, and passed me very quickly. Relief! He was really beginning to make me nervous.

My relief was short-lived. He immediately pulled in front of me and slowed down rather abruptly, causing me to tailgate him. Now, I hate being too close to a car. Why did he pull in front of me like that? I was still worried about my speed and checked to make sure that it remained steady. I did not have cruise control in this vehicle. It was easy to end up with a lead foot, especially when I was tired.

After another minute passed, I was tired of tailgating the trooper, so I pulled over into the left lane, still being cautious about my speed. The trooper remained in the right lane, about two car lengths ahead of me. We continued on like this for 3-4 minutes. I was nervous the entire time. It just seemed odd to me that this trooper would remain so close when we were on this big expanse of highway.

Finally, the trooper slowed way down, but wait! He pulled in behind me in the left lane and turned on his blue flashing lights.

Great, not only am I being pulled over by a state trooper, but now I’m going to have to rescue him from the vultures too!

The state trooper sat in his car for a looong time behind me, a very long time, a very very very long time. My nervousness was reaching a peak and my air conditioning was working overtime trying to keep my car cool. Was the sweat dripping down my face from nervousness or heat, or a combination of both.

The trooper exited his vehicle and approached mine with both hands on his hips, with more swagger than a policeman in a Clint Eastwood movie. There were no witnesses out here in the panhandle. Was I going to be beaten? Were drugs going to be planted in my car? I thought for sure I was going to jail.

It seemed like everything was moving in slow motion. Maybe it was just the heat waves shimmering on the blacktop. The officer approached my car. The swagger had left his hips and risen to his voice.

“Ya know what I pulled you over for partner,” he drawled.

“Ya was drivin’ in my blind spot back there. If I hadda needed to pull over to the lef’ lane, I mighta hit ya.”

“I’m sorry sir, I didn’t realize that,” I answered.

Here’s what I really wanted to say…

“You idiot. You were tailgating me, then you pulled in front of me causing me to tailgate you. I moved to the left so I wouldn’t be tailgating anymore. Why were you doing that when we have all this highway open?”

Fortunately I held my tongue and didn’t say anything. Remember, this was the panhandle and there were no witnesses. It was not my day to become vulture food. I can see the newspaper report now…

Colorado man found eaten by vultures on the side of the road in the Texas panhandle. The foreigner had no idea when he stopped to pee that he should have had a shotgun in one hand while taking care of business here in the panhandle. Outsiders beware! We don’t tolerate disrespect for the law in these parts.

The officer returned my paperwork and instructed me to have a good day.

For the rest of the summer, I drove about 5 miles under the limit through that entire section of my commute to college.

Maybe I’m being too rough on this trooper. With the exception of the occasional road kill and once every decade when a truck filled with cocaine was discovered, there wasn’t much happening in his part of the world. I drove this section of road twice a week for three summers, for a total of about 24 times. He drove it EVERY DAY!

He could have just stopped me, told me he was lonely and then we could have driven to the next small town and chatted over bad coffee and tasty tacos at the local diner. He could have shared about his dream to become a Texas Ranger and how he ended up in the Texas panhandle. I would have listened. I love Texas Rangers, especially Walker, Texas Ranger.