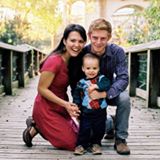 I went on to get a degree and moved overseas to start a band program at an international school. But my first year teaching would be Mr. Andrew’s last. Midway through the year he was diagnosed with brain cancer and given months to live. His final concert was an emotional one, as anyone can imagine.

I was too far away to be there, but I wrote a song for my band and performed it in his honor that same Spring.

The band program at Ben Lippen did not continue after Mr. Andrews passed, (about 7 years ago now) and the band room has been the “Large Group Instructional” room since then. Until this year.

Last fall, I was hired by Ben Lippen to re-start the program and we just had our first spring Concert tonight. The highlight was our performance of that same song I composed in his honor my first year teaching.

So Mr. Andrews, here I am. I’m trying to fill your shoes. Thanks for giving me my first trombone lesson, for noticing me, valuing me, encouraging me to stick with it, inviting me hang out in your office with the cool kids, and letting me bring my cassette player in to record our songs all the time

Most days band directing is banging my head on the floor. But not every day. Tonight was a night that made me feel like I have the “best job in the world”. I have your job now, but I’ll ever be working my way toward being a director like you. Thank you for everything.